Cultural tourism has become a fundamental part of the tourism industry in Tanzania spearing an increase in tourist arrivals into the country, thus empowering rural communities to reap the fruits of globalization and the ever growing tourism industry.

This type of tourism allows visitors to experience authentic, indigenous cultures by combining nature, scenery, folklore, rituals, art & crafts, ceremonies, dances and local hospitality of Tanzania to give a unique perspective into the daily lives of the local people, simultaneously allowing them to experience the wildlife safari in Tanzania and Zanzibar holidays has to offer.

Tanzania’s peoples they are among the most welcoming and approachable on earth, with the range of fascinating cultures ready to be shared with visitors. Kilimanjaro to the world famous maasai cultural tours excursion or a longer stay among local peoples is likely to become one of the most rewarding experiences of and holidays in tanzania. 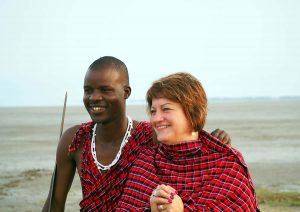 The Maasai are a Nilotic ethnic group inhabiting southern Kenya and northern Tanzania. They are among the best known local populations due to their residence near the many game parks of the African Great Lakes, and their distinctive customs and dress. The Maasai speak the Maa language, a member of the Nilo-Saharan family that is related to Dinka and Nuer. They are also educated in the official languages of Kenya and Tanzania, Swahili and English. The Maasai population has been reported as numbering 841,622 in Kenya in the 2009 census, compared to 377,089 in the 1989 census

The Maasai have a rich cultural tradition and this includes crafts such as beautiful beadwork and intricate hairstyles that articulate the wearer’s position and stage of life. 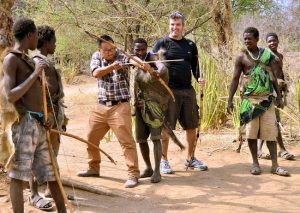 There three Bushman tribes in Tanzania who are Hudzabe, Datoga and Tindiga, among of the few remaining hunter – gathering groups on the planet. The hudzabe and Datoga are found around Lake Eyasi in the Central Rift Valley and neighboring Serengeti plateau while the Tindiga are found at Dongobeshi – Karatu.

The bushman tribes still maintain the traditional hunter – gatherer ways of their lifestyle. They depend much on bush life as the hunted animals to get food, use trees and grasses build huts for accommodation or shelter, trees also for food (fruits and roots), trees and animals for ornaments, cloths and tools.

Men hunt for wild animals and birds with bows and arrows. There are different arrows of different types of animals; poisoned arrows are used for large animals. Bushmen do not eat the hyena and lion. They are also eaten tubers and fruits from the Baobab tree.

They live in huts marked by upright sticks and grasses in semi – circle, some of the trees and bushes during dry season and during wet season they live in caves. Their beds and floor mats are hidden from Kudu and Impala.

Normally traditional dancing and singing makes them together in occasions and gathering. Such an amazing lifestyle of the Bushmen in Tanzania