The great Serengeti wildebeest migration is the movement of vast numbers of the Serengeti’s wildebeest, accompanied by large numbers of zebra, and smaller numbers of Grant’s gazelle, Thomson’s gazelle, eland and impala. These move in an annual pattern which is fairly predictable. They migrating throughout the year, constantly seeking fresh grazing and, it’s now thought, better quality water.

The Great Migration has been listed as one of the Seven Natural Wonders of the World. Not only does it offer incredible views of the plains dotted with huge herds of wildebeest, zebra, and gazelle, but the rivers are often infested with large Nile crocodiles lying in wait. Some of the best safari opportunities in the world are found here, across a landscape made up of volcanic grasslands and vast plains interrupted by rocky outcrops, rivers, and forests. Visiting the right area in the right season will treat travellers to astonishing sightings of this natural phenomenon.

These migrational herds also attract the attention of some of the continent’s most renowned predators, ensuring that if travellers are following the Migration; big cats, crocodiles, and hyenas will never be too far behind. 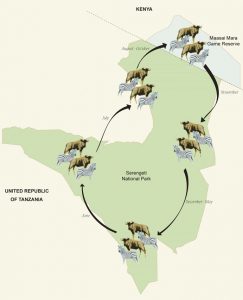 The short rains begin around early November. A little after this, in late November and December, the herds of the wildebeest migration arrive on the short-grass plains of the Serengeti. These are south and east of Seronera, around Ndutu and include the north of the Ngorongoro Conservation Area. Dispersed across these plains, wildebeest and zebra are everywhere – feeding on the fresh, nutritious grasses. They stay here through January, February and March, with most wildebeest calves born in a short window around February. Gradually they spread west across these plains, then around April they start their great migration north.

In May the Serengeti’s wildebeest all seem to be moving north, migrating to seek fresh grazing and water. The area around Moru Kopjes and west of Seronera is then hectic with a series of moving columns, often containing hundreds of thousands of animals – joined by many zebra, and a scattering of Thomson’s and Grant’s gazelles.

Some of the migration then head due north of Seronera, but most are usually further west. Around June the wildebeest migration is often halted on the south side of the Grumeti River, which has some channels which block or slow their migration north. The wildebeest then congregate there, in the Western Corridor, often building up to a high density before crossing the river. The river here is normally a series of pools and channels, but it’s not continuous – and so whilst they always represent an annual feast for the Grumeti River’s large crocodiles, these aren’t usually quite as spectacular as the crossings of the Mara River, further north.

The wildebeest migration continues moving northwards during July and August, often spreading out across a broad front: some heading through Grumeti Reserve and Ikorongo, others north through the heart of the Serengeti National Park.

By October the wildebeest herds are migrating again with more accord: all are heading south, through western Loliondo and the Serengeti National Park’s Lobo area, returning to the green shoots which follow the rains on the short-grass plains of the southern Serengeti in November.